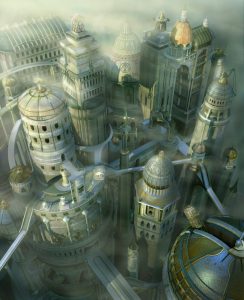 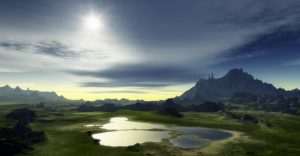 I was thinking about what I wanted most in a story. Some like spooky chills, others the heartache of a great romance. For me, it’s the OMG wonder of discovering an amazing world. Prydain. Middle Earth. Westeros. I love a fully-formed fantasy realm I can walk into and find friends waiting for me. I don’t take to most I find—I’m picky and take a while to settle in—but I’m loyal once it’s won me over.

I think part of the problem with finding a truly satisfying realm is that they’re hard to build. It goes far beyond naming kingdoms and drawing maps. There is a terroir that infuses everything so that the reader instinctively knows the smell and texture of each item in the place. Great authors can spin that out of the aether, making it distinct and complex and madly simple all at once. The characters grow from it (or vice versa) so that even the agents of change are the natural extension of the realm’s internal conflicts. It’s all terribly logical and consistent, as if the reader is encountering a history rather than a piece of fiction.

I read these things and think: I wish I’d written that. And somehow, weirdly, feel as if I have because the author has made it so incredibly real it’s become part of me just by looking at the page.

Is that writing or summoning a world?