Last weekend I treated myself to a few days away. I’d just survived a book deadline and was looking forward to baking in the sun at a local music festival. This meant a few hours’ drive up Vancouver Island on a beautiful sunny Friday. Getting there is half the fun, right?

One of the real treats with taking a road trip is the opportunity to stop in interesting places along the way. The very first tea farm in Canada, Westholme Tea Company (www.Westholmetea.com) is just north of the city of Duncan. After a drive down a winding country road, my friend and I stopped in a completely charming oasis that housed not only the farm, but also a charming garden patio, an intriguing shop filled with single origin and blended organic teas, and a pottery gallery.

The tea plants were smaller than I expected and grew in shaggy terraced rows along the hillside. Inside the shop we were offered samples of the tea du jour in tiny cups made from the very funky local pottery. The building was open and airy and filled with wonderful scents and lots of treasures to investigate. The staff was great, too, filled

with suggestions and information.

I learned a lot about the differences in taste between first and second flush teas. This refers to whether the tea is gathered from the first growth in the spring or from a later crop of leaves. The first flush has a more astringent taste and the second is mellower. Preference is a matter of taste, although

many prize the first flush and often that’s more expensive. Yes, I bought a few things, including a nice second flush Darjeeling.

I don’t follow a hundred mile diet, but investigating locally produced foods is a great excuse to seek out fascinating people doing cool things. Hopefully I’m shrinking my carbon footprint and expanding my horizons at the same time!

It’s spring, and the process of renewal happens. Sometimes it’s all bunnies and pansies, but other times I’m reminded the universe isn’t sentimental. In the past two days, I heard one of my long-time supervisors (now retired) passed away in her sleep, I wrote a farewell message in the going-away book of the boss who just left, and I see the posting for his replacement is out.  All this reminds me that none of us is irreplaceable and

that all we have control over is the memory we leave behind. That will fade, too, but for as long as it lasts, I want my shadow to be a pleasant one.

Since I’m a supervisor, too, I understand my role isn’t all about popularity. Some of it is about expectations, boundaries, and performance, but for the most part I have fabulous staff and discipline is not an issue. I have the privilege of concentrating on teaching, support, and seeing my folks reach their goals. If they compete for a better position and successfully move on, I’m sad but proud.

I try hard because I know how badly things can suck. At various times I’ve had very good and very difficult individuals in control of my work life. All of them taught me something, even if it was not to be like that. Understanding why someone behaves as they do may lead to sympathy, but it doesn’t prevent a sense of relief when the misery is over.  On the other hand, there have been people I truly miss a lot. I think of them every time I need to check my own messaging. Am I being fair? Am I helping? Am I putting responsibility where it belongs?

Someday, I will be replaced. Today reminded me of that. How other people respond to that moment is entirely up to me.

Our local museum has a special exhibit this summer, “Mammoths! Giants of the Ice Age.” It’s done in partnership with The Field Museum in Chicago. Among the things to see is Lyuba, a 40,000 year-old baby woolly mammoth discovered frozen in Siberia. Apparently she drowned and through an accident of ice and bacteria, the poor thing stayed pretty much intact until discovered in 2007 by some reindeer herders.

Lyuba was remarkable but sad. The exhibit as a whole was fascinating. There were bones and artist’s recreations of heads of mastodons and mammoths (who knew there was a difference?) and lots of other elephantine relations. It’s a wonderful exhibit for kids because there are lots of interactive activities. Even as a non-kid, I enjoyed the straightforward presentation of the material. It reminded me of how much I loved biology in school–and how much of this stuff could be applied to a fantasy novel, because these critters were BIIIIGGG!  There were some life-sized statues I took photos of. The short-faced bear made a grizzly look small and I couldn’t get the whole mastodon into the frame.

If this show comes to your museum, I recommend the trip.

Sometimes people ask me what my favourite fairy tale was growing up. There is a lot to choose from–I read all of the fairy tale, ghost stories and myths I could get my hands on. Andrew Lang’s fairy books loomed large (The Red, Blue, Yellow etc Fairy Books) as well as the usual Grimm and other European trad stories.

Then there were all the Marvel and DC comics about superheroes. I didn’t differentiate much between the old stories and the new. The very best of course, was what happened when you combined fairy tales and comic books! And so my love affair with a ragged copy of Hans Christian Andersen’s The Tinder Box was born.

I don’t know why the story isn’t better known. It has all the great elements: a kidnapped princess, a clever but poor young man who saves her, and talking animals! The plot is simple–young man sets out to rescue the princess and ends up saving the day, but only through the help of three magical dogs summoned by the tinder box. The only reason he gets his hands on the box is because of his generous and helping spirit. Yes, he does his fair share of manly-man swashbuckling, but it’s the fact that he’s a good guy that wins the day. He’s somebody we feel sure will look after his princess.

There are a number of versions of this story throughout the fairy tale universe–one is a very old Welsh tale that has the hero saving ants from a fire and they later play a part in helping him along. The message of the story is clear: no matter how humble someone is, they have something to offer the world and should not be left to perish. I think that’s a tale for everyone, young and old.

10 Obscure recipe ingredient. Must have it.

8 Distant relations haven’t heard from me since the 90s.

7 My car is overdue for servicing

2 Must Google for new reviews. Then the aftermath.

We need to have a chat about the kibble

The Demon Lord of Kitty Badness in conversational mode.

Those who know computers and cats will know whereof I speak. I’m on deadline for Enchanted Guardian, and I have a stiff daily page count to make.  However, the Demon Lord of Kitty Badness can’t go half an hour without an adoration break. He considers this his contribution to the writing process: ensuring that I take those important moments to bend and stretch (as when tossing a nerf ball, filling a food dish, or removing him from some small instance of destruction). Without his input, I’d become overly focussed on unimportant work goals. Also, the type of progress I’m seeking is a mundane, unenlightened human measurement. Frequency of cuddle sessions are a far better performance measure.

Everything is teamwork when you have a cat. Important safety tip:  the cat is the team leader.

The chair is not your friend

It’s become one of those irritating truths that if I don’t make an appointment with myself to move, I won’t.  Don’t get me wrong – I don’t hate exercise. I’ve never been into sports per se, but I like  walking, low impact aerobics, and even mild weightlifting is quite fine by me. Sweat is good. I walk a half hour to and from work. I belong to a gym.

Getting to the gym is another matter (it’s not fair, because really owning a membership alone should magically keep me in shape). Like so many people, I sit in front of a computer at my day job and then in the evenings, too. Everything seems to be connected to a screen these days, and that means sitting, sitting, sitting. Unfortunately, writing requires more of the same. Current medical wisdom claims sitting is as bad for one’s health as smoking, and I’m inclined to believe it. It’s not just about burning calories; I don’t sleep if I don’t get at least some physical activity during the day. I need exercise to burn off stress.

It’s the new fall season, so I’m making a new commitment to being healthy. I got new gym shoes to replace the pair that I’d worn through (nothing but plastic left in the heels!) and I have my gym clothes ready and waiting for the early morning treadmill. Wish me luck!

I wrote this post because making a commitment out loud is supposed to make us accountable. There, I’ve done it! 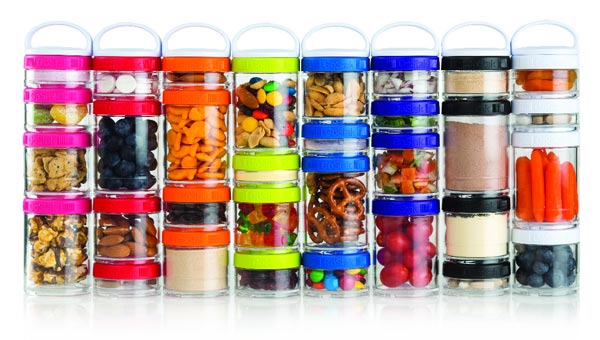 I have a terrible obsession with containers. I deeply believe that if I owned the right organizers and boxes, my life would run smoothly. There is some truth to that: if stuff has a home, it’s less likely to be toppling off tabletops and making mountains on the floor.

But mostly I think I like pretty colourful toys. The trend toward brightly coloured lunch kits pleases me enormously.  I love these GoStak containers for holding nuts, dressings, and other spillable items. The bottom of one jar forms the top of the next and the top one has a handle.

I pack a lunch for work pretty much every day (I hardly ever escape my desk for a restaurant meal). The other consideration for good containers is therefore how light they are.  I managed to tear the muscles in my shoulder from carrying too much in my tote bag day after day, which has taken months to heal.  So, lightweight is good. These are made of a tough but light (and toxin-free) plastic.  The other find I made lately is from Sistema – they make a range of containers that have the cutlery built in and

clipped inside, so if you forget a fork there are no worries.  They also have sections that segregate wet and dry ingredients, so the granola for your yogurt doesn’t turn to rubber before you eat it.  A small consideration, but texture is part of what makes food enjoyable!

I bought a few of these containers when I found them to replace old ones that were past their prime. They aren’t the cheapest on the market, but I know I’ll get the value out of them since 5 lunches a week x 52 weeks a year means plenty of mileage. By packing my meals, I’m eating better, spending less, and keeping waste out of the landfill.

On the whole, though, I think I was drawn by the bright colours and the fact that there were lots of clippy-snappy bits to play with. Maybe what I really want is an edible Lego set?