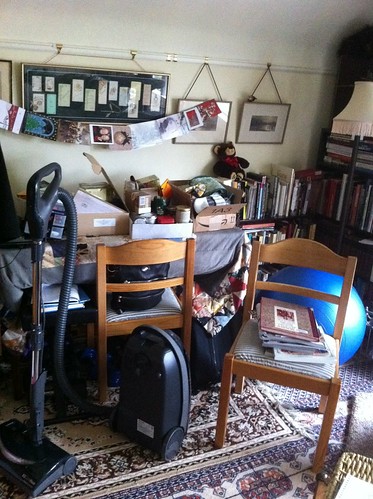 So, I make a lot of plans for my holidays. I’m no different than most people—I procrastinate tasks for “when I’m off” and always think there is more time than there actually is.

This year was no exception, although I quite sensibly (I thought) confined most of my ambitions to revising one manuscript and starting another. Oh, and there was a fat file of contest entries I had to judge, Christmas stuff, and a bunch of appointments I’d made for my theoretically “free” time. I made a chart just to ensure I paced myself properly. This year, I was going to be organized and maximize my days off.

And then the gods laughed. I live in a 1911 house that’s had a lot of renos and renters before I got here. Most seemed to have a casual attitude to wiring and mildew and no decorating taste, but the place was affordable.

Back in the summer, I’d booked a guy to strip my kitchen wallpaper and paint. This is the final phase of a kitchen update that has been going on forever, each stage taking place as money and time allowed. I’d already put in a new stove, lights, a stainless steel backsplash and shelving. This is the last of it—not a huge job, but a very fiddly one involving a lot of repairs and who-knows-what’s-behind-that surfaces.

Of course, I’d booked the painter in the summer but schedules are never what you think. I had to back out, then he got delayed and, well, it was months later. But he had a few days free, if I wanted him to come December 27, right in the middle of holiday chaos. With a sigh I gave up on my holiday timetable and figured I may as well get while the getting was good and start 2012 with the project finished. 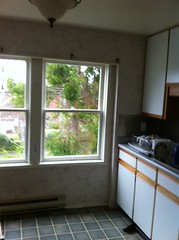 Here is a picture of the kitchen in its present state: the counter and floor is okay, but the baseboards have almost no paint left and the wallpaper is torn and water stained. I think it was intended for a bedroom, not anyplace where water and food were around. 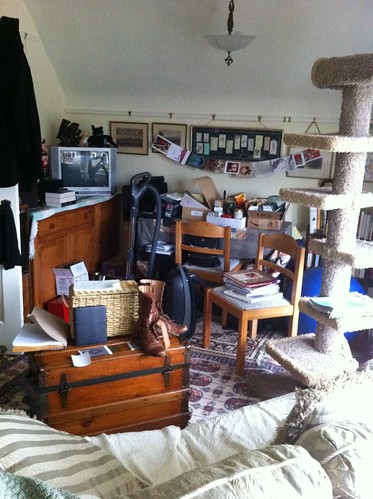 Here is a picture of my living room, with all the kitchen stuff piled in it. I’m not living here, I’m burrowing in a heap of possessions!