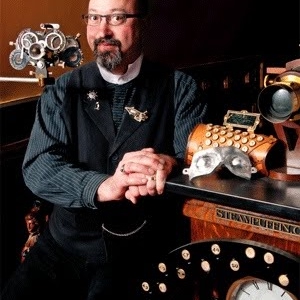 Anyone who reads A Study in Ashes will see the key role that the makers play in the story. They’re the ones who secretly keep the people’s independence alive in their secret sheds and forges while everything else goes to pieces. That insistence on independent creativity and craftsmanship appeals to both my heart and my mind and is (at least in my opinion!) the keystone to the steampunk movement.

It’s with great pleasure that I invite Bruce Rosenbaum, President of ModVic, LLC, into my virtual parlour. He’s  an artist, designer, and community activist. Since any artist’s work speaks for them with more eloquence than anything I could say, please check out this virtual house tour and his awesome website to see exactly what it is he does.

All comments on this blog will be entered into a draw for a book of your choice from the Baskerville Affair trilogy!

Remember, EVERY comment made on one of my guests’ blogs in December will be entered for a $50 Amazon gift certificate!

And now, ladies and gentlemen, I give you Mr. Rosenbaum …

There is no singular history or definition of Steampunk – therein lies its beauty. The possibility of change, reimagining, improvement, valuing the humanity and contributions of each person – gives the Steampunk movement ‘legs’ into future time periods and eras.

In interior or object design, the contrast and juxtaposition of new and old styles (eclectic) can be trendy, but Steampunk bucks the trend in favor of timelessness. It offers boundless possibilities of infusion or blending of opposites: old and new; past and present; Victorian/industrial décor and modern-day technology.

This blending of opposites is called Janusian Thinking (see Psychiatrist Albert Rothenberg) and we are employing creative problem solving techniques through the synthesis of opposites. The best inventions and innovations have come about through bringing opposites together for one elegant solution (think of the hammer, pencil and jackknife).

The idea is bringing two opposites together in your mind, holding them there together at the same time, considering their relationships, similarities, pros and cons and interplay, then creating something new and useful.

Our Janusian ‘future-past’ approach functions as a reconciliation of contradiction to a unique creative solution to our problems of today. It’s incredibly liberating to look at the world around you and your life and say it doesn’t have to be this way – what I have can be improved through our own thought process and the process of reimagining and making. We can overcome life’s paradoxes and problems by forming creative and elegant solutions.

Steampunk as a Popular Design Aesthetic

Steampunk as an aesthetic, at its essence, is a design solution with divergent thinking, innovative and imaginative designs and elegant infusion of all time periods and functions.

At this time – early 21st century, the focus has been on going back to the Victorian period or Industrial age—late 19th century and early 20th century. This time period in history was when our man-made machines first transformed the world and  craftspeople were abundant and proud to make things that would seemingly last forever.

The Victorian age is also a unique time in U.S. history – producing highly imaginative, high quality machines and beautifully crafted objects that now in large part have outlived their usefulness in the modern world. Steampunk now is about giving new life to these intrinsically valuable objects, re-inventing the pieces again so it is assured they last another 100 years into whatever period comes next.

In fact, Steampunk design can go two ways: (1) Taking authentic Victorian objects, rooms or homes and modernize them for today’s use or (2) Taking modern items and “Victorianizing” them to appear they are original from the period.

My own Steampunk design focus has been on infusing 21st century technology into authentic Victorian objects to give them new function, new purpose in our lives today.

In our own home – we’ve been somewhat obsessive in bringing this design aesthetic to fruition. The two best rooms in any house to create Steampunk design are the kitchen and office – places that employ quite a bit of 21st century technology to make our lives easier and more productive. Our Steampunk House does have a Steampunk kitchen and office – you can actually take a virtual tour by visiting our website www.modvic.com.

A technology trend that has been helpful to all Steampunkers is the push towards miniaturization in electronics. Smaller is better for Steampunk inventors because it’s quite a bit easier for us to fit more technology into smaller existing spaces of Victorian cabinets, desks, and period objects of all sorts.

There are some general Steampunk ‘modifying rules’ that I try to stick by. If you’re not careful, you can transform an object to a point where you lose the essence of what it was — obscuring its rich history and original purpose.

2.     Modify objects that are in need of TLC (currently in a state of disrepair). You want to feel that you’re ‘saving’ the object and giving it a new life where otherwise it might have been left to the dustbin or trash heap of history. Note: Please don’t modify antiques that have great value in their present condition – Steampunkers still value period items ‘as is’ and don’t want to devalue great objects.  Steampunk inventions may also include recycled items to promote environmentally-friendly reuse designs.

3.     Inventions should be of outstanding individuality, beauty and exquisite craftsmanship. You want to mirror the original maker’s pride in the quality of their work.

4.     Seamless blending of the period item and new technology leading to a feeling of ‘permanence’ to the Steampunk technology design solution. Your creative design solution should feel that the object could have somehow been originally intended to house modern technology when it became available.

5.     Use of cutting edge technologies within the Steampunk design. Modern technology has a limited life and it makes no sense to install technology that is already or soon to be obsolete.

By its very nature Steampunk is timeless. The rejection of the present comes out in a nostalgia for the past or a idealized future – a Utopia. Steampunk combines a love for all periods and fuses the best elements of the past, present and future. It’s empowering – Steampunkers control the mix, they define it and they will change it as they see fit.