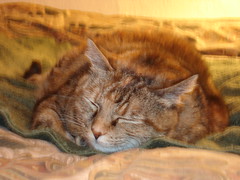 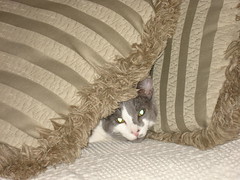 The Internet and Me

X-posted from FFF – the topic was how has the internet changed the compositional process.

How the internet has changed my writing.  Hmm. Let me see … oh, wait, here’s a new message! Better check it out! Wow! A great deal on worms for the compost! …uh, back now.  Hmm. So many people are going to read this, I’d better get the right answer. If I get the wrong one, it’ll keep coming back to cyberhaunt me forever.  Golly.  Maybe I should Google myself to see what people are saying and try and work from there.  Ah, another message.  Better go read that.

Okay, concentrate.  How has the internet changed my writing? It does give me instant look-up for all kinds of facts.  I can spend hours looking stuff up…hours and hours…it’s good to find a bunch of sources and then cross-check them to make sure they’re reliable ’cause you just never know who put them up and then maybe checking with a regular library might be a good idea, which I do the minute I stop fooling around eBay.

Oh, another message … Wow, I didn’t know the human body could do that.

Seriously, folks, I don’t know that the Internet has changed my actual writing style or the way I write my books, but then being a natural Luddite, I started out writing longhand. The benefits to me have been the breadth of exposure to other writers, on-line critique groups (waves to anyone tuning in who belongs to the OWG), and access to coaches and classes I would not have otherwise enjoyed.

However, there are distractions, like email and endless surfing, that slow me down. If I’m in the mood to procrastinate, it’s deadly.

As a sidebar, I wonder if the Internet has changed readers. It seems to me the long, complex books are a harder sell these days—at least in genre fiction. I’m not an expert on these things, but I wonder sometimes if the Internet, along with other electronic media, is one of the many factors that have created an audience eager for faster-paced, edgier books. Has the need to keep up with the pace of information changed our tolerance for slower, more subtle writing?

Finally up and running, sort of

My temporary web site is up at www.sharonashwood.com.  There’s not much there yet because, let’s face it, until I at least get a cover design for my book there’s not much to include.  However, having someplace to put all that good stuff once it arrives makes me feel better.  I’m on the web; therefore, I exist and can move on to other things.  It’ll be nice when the official and better designed site gets up and running, but this at least gives me a place to hang out.

I’ve wanted to spend time on this blog relating interesting tidbits about the supernatural in the news. However, I’ve suddenly been hearing a lot about nanofoods. Not exactly paranormal, but not exactly normal either, and worth a thought.

Nanofood is, apparently, food with enhanced molecular “extras.” The point is to change the properties of food to, say, taste like whole fat mayo when it’s mostly water or make something whip to a froth that isn’t supposed to.  The possibilities for enhanced nutrient contents or really good “diet” foods is huge, what one writer described as a new industrial revolution.

What nobody knows at this point is the long term effects of this stuff and, after the outcry against genetically modified foods, it seems the development of nanofoods is happening in a quiet way. I read one oblique reference to a problem with the nanobits unexpectedly going diving in the nucleii of nearby cells–something the researchers viewed with understandable concern. Extra bits swimming in the DNA.  Can’t be good.

I might be excused for thinking of the Borg. Already I have enough problems walking past a bakery and thinking “resistance is futile.”

And this all goes to prove that, whatever I dream up as a writer, reality is much more strange.